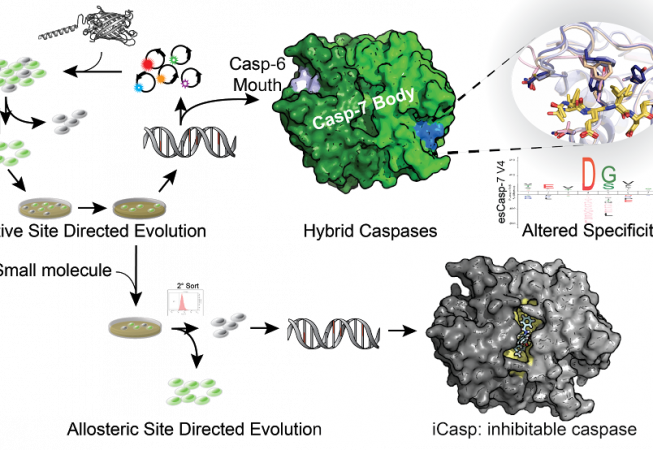 Our lab has developed a directed evolution method using our dark-to-bright GFP reporter that enables us to to tune specificity into intracellular proteases.  In our first application of this technology, we sought to change the specificity of caspase-7 (DEVD) to that of caspase-6 (VEID) and produced evolved-specificity caspase-7 (esCasp-7) variants that maintained the body of caspase-7, but had caspase-6-like activity.  With this hybrid enzyme, we sought to decipher proteins that may rely on non-active site interactions (exosites) for recognition.  Such reprogrammed caspases represent a new method to discover exosite driven substrates and should be broadly applicable to many other proteases. We are also interested in engineering allosteric sites on caspases to develop iCasps: caspases that are inhibited by a small molecule of interest.  This type of regulation is desirable so that caspase activity can be silenced only under specific cellular conditions.